Before it titled Michelle Obama’s book, it was the title that perfectly described the subject of BECOMING MARJORIE, the story of one of America’s unsung heroines of the feminist movement, so that’s what I used! I wrote that biography and launched it in 2017. And today (for the first time), I saw one of the TV interviews done at that time: 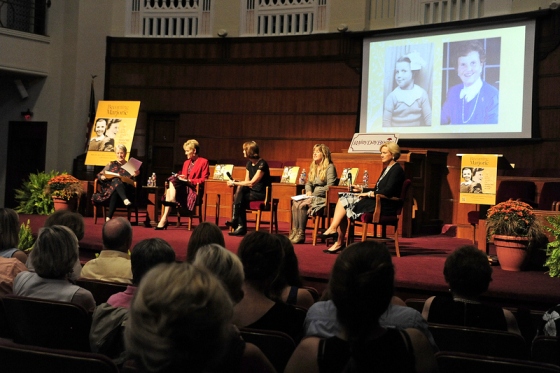 Sharing the stage with (left to right) Rainy Day Books founder and owner, Vivien Jennings, Marjorie’s daughters Barbara and Debbie, the author (me!), and Marjorie’s friend and colleague, Janice Kreamer, Chair of the Kauffman Foundation.

More than two years ago, I began a book commission to capture the story of one of our nation’s unsung feminists–the sort of woman who wouldn’t have even called herself a feminist. It all culminated with an incredible launch week for me full of media interviews and promo stuff from September 19 to 24, 2017.  All those spoon-bending, how-in-the-heck-am-I-gonna-do-this hours spent (and will experience again–I’m already into the next commission) do somehow grow from an idea into the words and they find their pages and get beautifully bound and into the hands of readers. 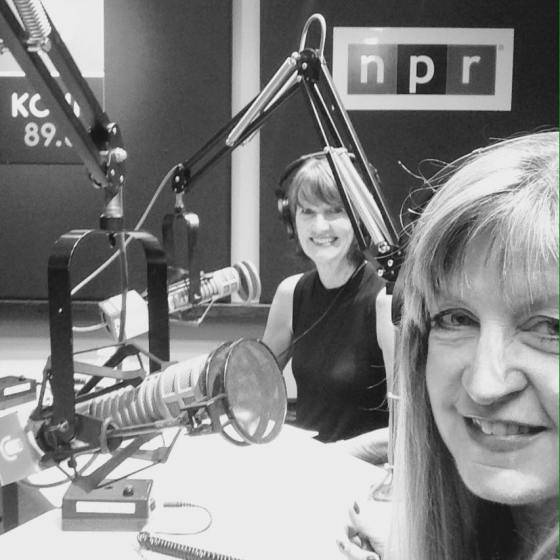 The NPR gig: now to remember everything I wrote!

I’m going to give enormous credit to the most amazing artists who comprise 94 Design–Paul and Laura Adams. Their exquisitely art-directed style turned boxes of artifacts into thoughtful visual assets. This is our second book together and I really don’t want to ever try this without them. They make my concept real, and then they make even better than I hoped it could look. 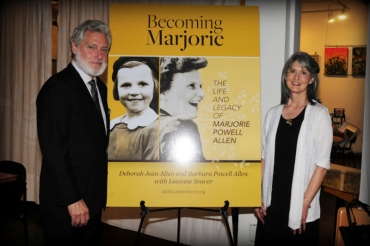 Paul and Laura Adams of 94 Design are the consummate professionals behind the art-directed look.

If you’d like to learn more about the woman who prompted a book to be written about her amazing life and legacy 25 years after she died, she’s here: 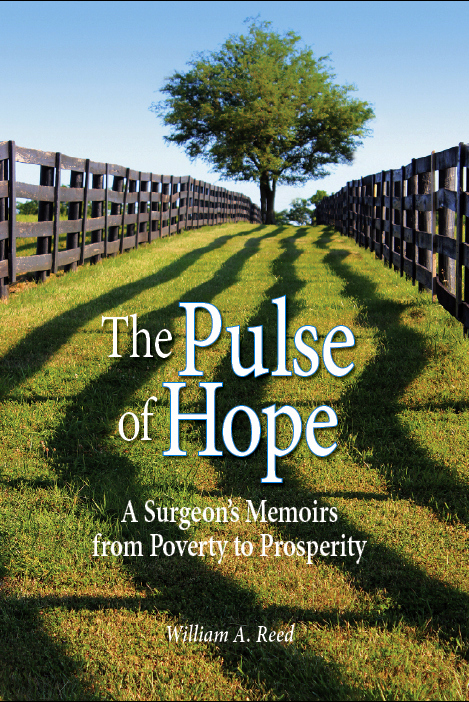 “The first poets I admired were the trees. It was a blessing to be surrounded by nature during childhood. It gave me a sensory vocabulary for things that couldn’t be contained in words, by which I suppose I mean feelings, but even more than feelings. Does that make sense? For me, nature expresses truth in a way that explains joy, suffering, irony, and people. Growing up as I did, I had to work hard at understanding the world, and my place in it. I was born William Allen Reed on July 18, 1927, on the backside of Kokomo, Indiana, to a family too poor to feed another child. It was the summer of Babe Ruth, Charles Lindbergh, and Al Capone . . . just before the world went dark into the Depression.

We were already living in dire conditions before the Crash of 1929, but things went from bad to worse then. It was a hard-scrabble existence. There were eight of us kids, four to a bed inside the thin walls of the small frame sharecropper’s cottage we rented. We had a coal-burning stove in the middle of the living room as the sole source of heat, and an unheated outhouse out back. There was never enough food and what we did have was often courtesy of local county assistance program. There were no special treats, birthday cakes, or Christmas presents, except for what came from the county. Once I got a light blue sweater, generically given to a “Boy, age 9,” but I can’t recall anything else except the raw feeling of not having what other families seemed to have. It was a stark, meager life made tolerable by my mother and a growing awareness of the beauty that I easily could have missed.

My mother Aldine helped me glimpse the bigger picture. She would show something beautiful just to me, of all her children. She would point out a rose or honeysuckle and in that pointing was a woman seeing more than her bitter, angry, unemployed husband and her hungry, anxious children. It was a vision she shared with me, a quiet leaf of a boy who desperately needed to see that there was more to life. That’s what comes of reading trees and flowers and nature—a grasp of the finer side of one’s circumstances and people. People are a lot like plants. Life has given me ample opportunity to gain fluency in this perspective.

There in the quiet hunger of my childhood, I was a detached observer of the passing scenes. I was raggedy, barefoot, underfed, and hollow-eyed with hair like oat straw. I felt estranged from much of life, a survival tactic no doubt. I’m not sure I can explain how I changed from that skinny, confused kid to the young man who decided he was going to be a doctor; or how I went from a doctor to one of the earliest successful heart surgeons, and then from the surgeon to a horseman raising racing thoroughbreds, and a philanthropist.  A lot of people have asked me to tell the story of how I did that. If it helps anyone to read it, then it’s worth a try.”

It took me about a year and a half to write William Reed’s memoirs . . . he talked and I listened.  I came to know his “voice” as well as the way he wanted to sound, which is an even greater challenge for a ghostwriter.  Then I wrote.  And wrote.  AND WROTE.  When I wasn’t writing, I was taking pictures of his beautiful horse farm where the thoroughbreds would race over to the fence in hopes that I had a peppermint for them.  I knew they would stop in time, but the presence of such speed and strength never ceased to make my heart leap.  The book cover photo is one of mine–didn’t know it would end up on the book when I took it.  But it surely belongs there.

We launched the book on November 1, 2014.  The Pulse of Hope is available at http://www.thepulseofhope.com or from Rainy Day Books:  http://www.rainydaybooks.com/WilliamReed