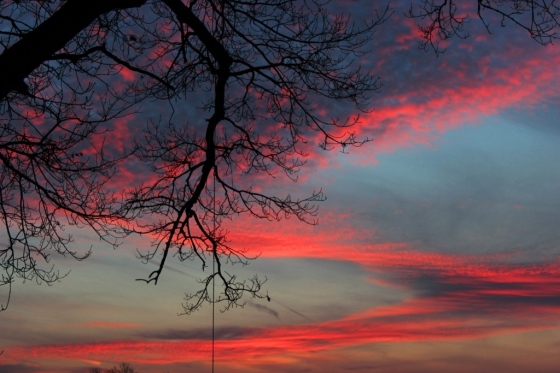 of what I can’t say

that would sound soft

one toe in sand that I

of my heart holding 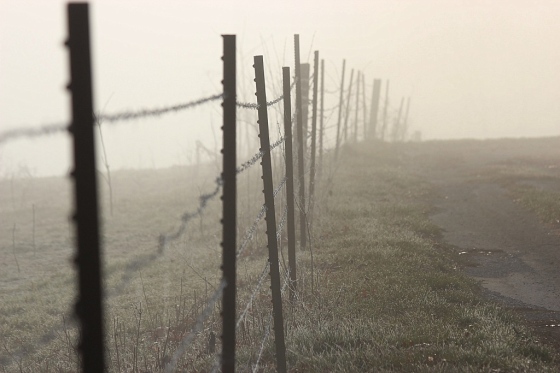 The Coyotes surely understand it.

Our Scottie dog surely understood it,

howling with all the agony of Scotland.

bleating their grief when their calves are taken…

stomping their hooves and rubbing their foreheads

in an expression of emotion

that leaves me gaping in wonder.

The parents wailing in a playground in Pakistan . . .

Emitting no words . . . not even organized cries, only high-pitched gasps,

trying to knit ourselves, our faces, our children, our planet 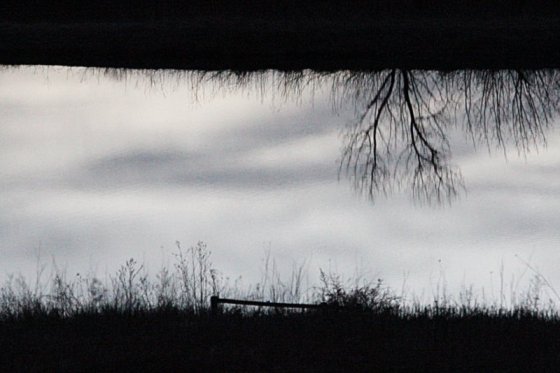 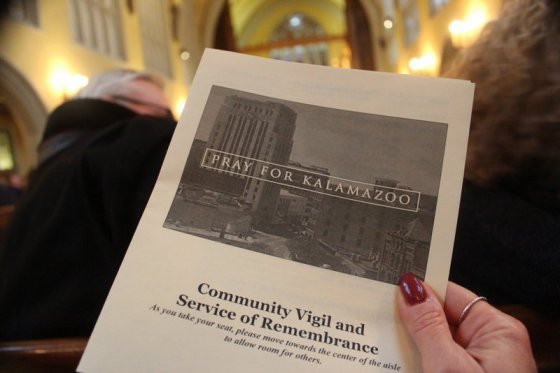 Last night as we brought ourselves together to mourn and heal, Reverend Rachel Lonberg of People’s Church (Unitarian Universalist) said a true thing . . .

What can we do but love the hell out of this world? 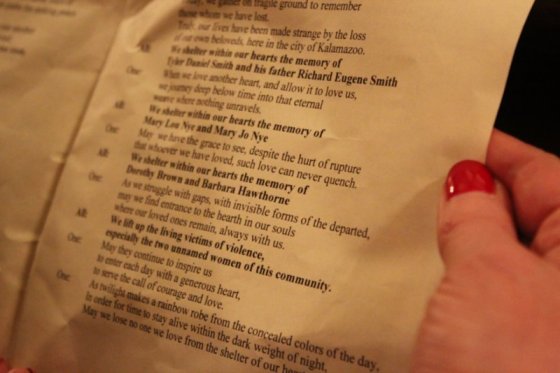 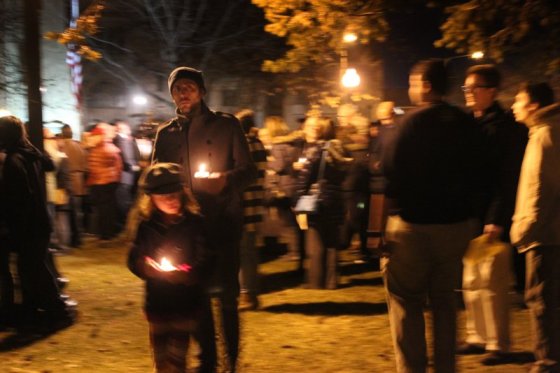 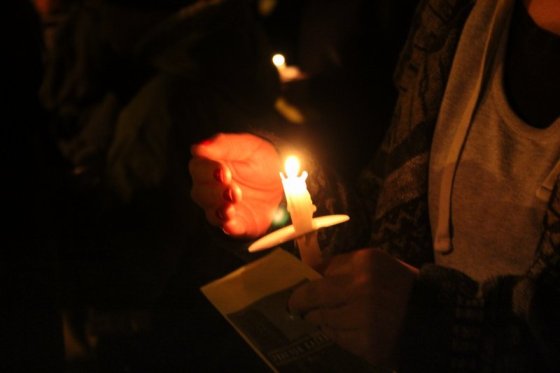 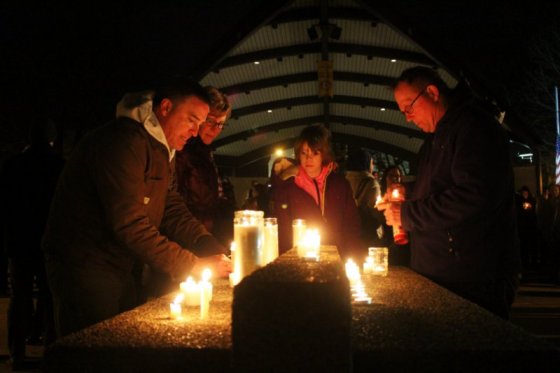 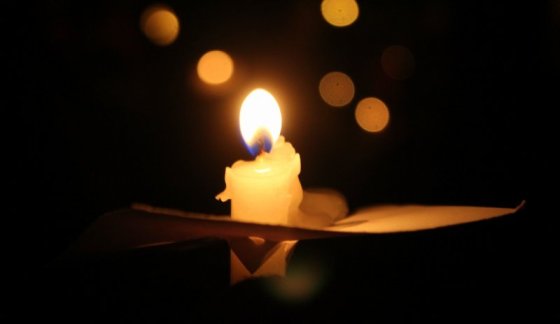 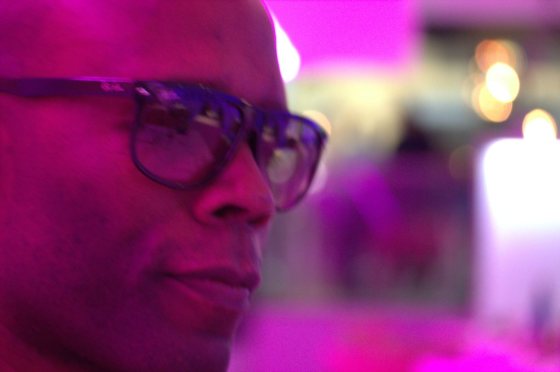 Finally, the wine finds a topic it likes and the conversation changes to his blindness…from a gunshot during his gang years…a look he wears very well behind his Ray-Ban’s at night in the sweater from the National Theatre Company of Norway where he just completed a tour of his one-man-show…I ask him what is the best thing about being blind… his face loosens, one corner of his mouth lifting a curtain peek smile    …he says he’s glad he’s beyond “lookism” altogether…that he doesn’t even wonder what people look like any more, in fact, he long ago stopped asking his friends to describe women to him, too…none of that mattered any more…he’d finally reached a calm resignation…this is the best thing, he says…that it doesn’t matter to him what anything looks like…then we go quiet…he adds that lookism is a blind thing…an attitude…and I say, well, it sounds pretty evolved to me…he shakes his head and shrugs…we sit quiet for a while longer…sure, I can take his picture he says 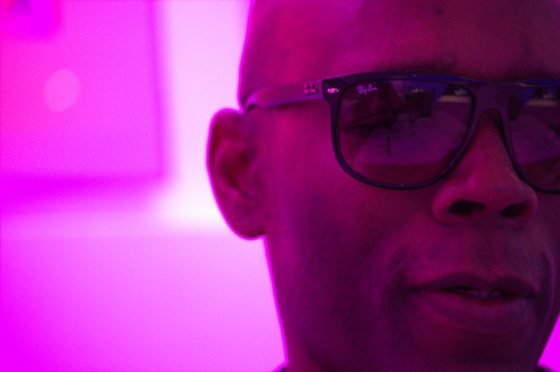 Finally, he speaks again from that quiet place where the wine has settled…that maybe it’s just that he is so bad at imagining what he can no longer see…that he is really lousy at it and tired of not knowing and worn out with asking, so, like all blind people, he adopted the mantra of not caring…and I don’t know what I should say to that…but it’s too late cuz the wine blurts out “the linen on this table is white and the plates are black”…he seems to stop breathing, he doesn’t move a muscle…so the wine goes on… about what our hosts look like…their compact bodies in warm coats with wool scarves…Matt taking care of everybody cheerfully…and Su’s bright eyes always scanning the crowds…how they assess asses in seats…report to each other with knowing glances…lean into each other later still in love…after the show when they took us to dinner at the Iridium…buzzed and soaked with Freda Payne crooning Summertime … while he and I sat there like February… cuz it is February…it’s always February now unless it’s November… and now here we are just as cold as they were warm… so I pour some more… you know, Freda has aged well and the boys in her band watched her trancelike, their fingers touching the keys and strings the way their eyes caressed her…the room heating up eazzzy…then I describe the lighting in the bar where we now sit, near closing time, all stark chromed sophistication with dozens of clear vases mounted in wall sconces each holding a single bloodred rose like in a mausoleum…  that the inset lights are purple and orange fusing the air into fuschia…the exact color everything blurs to…it’s blow on your eyes at 2am in Times Square…the neon stepchild of Dr. Seuss and Andy Warhol…now he leans forward, bending his head towards me…yes, nodding, he could feel all of that… he can’t see it but he can feel it…and the wine smiles slowly into the direction of my voice and asks what I look like as he sits back, stretching his long legs out, puts his hands behind his head, takes a deep drag of Manhattan and blows it out with a whistle… he ventures that I am a tall brunette with dark eyes… and the wine says, well… I’m not all that tall… 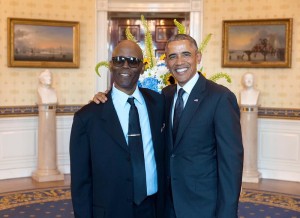 Post Script:  On 3 August 2015, my dear friend and colleague Lynn Manning (shown above with President Obama two weeks ago) died after a very private battle with cancer.  He was a force of nature–an award-winning African-American poet, a gifted performer, a brilliant playwright, the inspired and inspiring founder/artistic director of The Watts Village Theatre Company in Los Angeles, and the former World Champion of Blind Judo.  At our annual Bridge Multimedia meeting in New York City, I was with him for the premiere of the Reel Abilities Film Festival in March 2015. 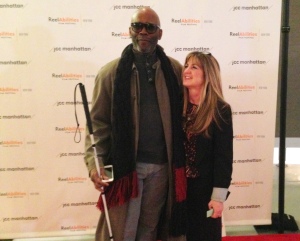 It was another of those evenings when I had the privilege of seeing more than I ever do on my own.
I miss my friend Manning right now for the rest of my life.